Remember the community charge, or the poll tax as it became better known? The supposed merit of the system was that it was simple, easy to understand and straightforward to apply. But like many things that are simple it was flawed. It was also extremely unfair. Under the poll tax, everyone would pay the same and so the poorest would suffer most.

I spend a lot of my time pulling VA apart. It’s a bit of an obsession. Every year I produce a VA calculator, which schools can download here, and in December last year I wrote this blog to explain how VA is likely to work next year once levels have gone (hint: VA was never really anything to do with levels anyway). I assumed that it was business as usual, that a pupil’s attainment at KS2 would be compared against the average attainment for pupils nationally with the same KS1 start point. Well, it appears I was almost right. Almost, but not quite.
Last week Michael Tidd released this rather excellent video (not that I’m jealous or anything) and accompanying blog. He’d already run the video past me a couple of weeks back and I stated that I didn’t think it was quite right, that the proposed methodology had been oversimplified. The big difference between the method described in the video and that which I had assumed from previous RAISE methodology, was that the video (and other guidance doing the rounds) suggested that pupils’ KS2 estimates would be based on overall KS1 APS, whilst I assumed it would be based on the precise KS1 profile (i.e. KS2 attainment of 2B, 2B, 2B pupils would only be compared against other 2B, 2B, 2B pupils). Michael sought confirmation from the DfE and it turns out I may have been wrong: from 2016, KS2 VA estimates will be based on overall KS1 APS, and this bothers me.
Up to and including this year, VA estimates for KS2 (the line pupils need to cross to achieve a positive VA score) were calculated from the KS1 APS but the pupil’s relative differences in maths and reading at KS1 were taken into account. This meant that pupils with the same KS1 APS but with different KS1 profiles had different – sometimes very different – estimates for KS2. The following table, taken from my VA calculator, shows these differences for pupils who all had a KS1 APS of 15 but had different KS1 attainment profiles. 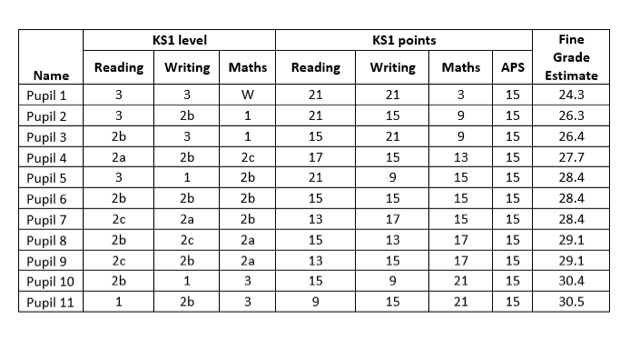 The estimates range from 24.3 points for the admittedly unlikely pupil who was L3 in reading and writing and W in maths, up to 30.5 points for the L1, 2b, L3 pupil. There is a 2 point difference in estimates between pupils with more likely KS1 profiles.
So, that’s how it works this year. But next year, under the proposed new model, all these pupils will have the same scaled score estimates. Regardless of differences in attainment at KS1, they will have the same expectations for KS2 as long as the KS1 APS is the same. They will all have to cross the same line.
Simple, easy to understand and easy to administer.
But is it fair?